Glutathione's effect on the skin

Glutathione reduced is an innate substance in the human body

In infants and young children, the content of glutathione in the body is highest, and it decreases with age. In nature, it mainly exists in animal liver, yeast, muscle and blood cells. Some plants also contain high glutathione, such as tomatoes, cherries, cherry tomatoes (commonly known as small tomatoes) and so on.

Low glutathione is a tripeptide

Glutathione is a tripeptide composed of glutamic acid, cystine and glycine. It is a physiological factor with a wide range of physiological functions. GSH is abbreviated as GSH, which is the collective name of Glutathione + sulfhydryl SH. Like some whitening substances, such as tranexamic acid, it is mainly used for non-whitening effects in the early clinical stage. The core clinical role of glutathione is detoxification, so it has a significant role in purifying internal organs, such as repairing liver and kidney. The organ is damaged, and heavy metals are removed from the body. Later, it was discovered that glutathione has the effect of whitening skin and improving skin quality. As for how glutathione is achieved. Still have to start from the mechanism of human skin aging and darkening. 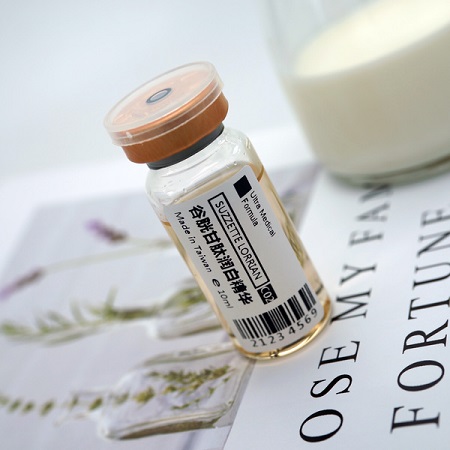 The role of glutathione in the human body

An important cause of skin aging is free radicals! Under normal circumstances, our body can balance free radicals, the little troublemaker, but with the deterioration of the environment around our lives, plus staying up late, drinking, smoking, and constant pressure. There are more and more free radicals in the human body, and the more electrons you rob, the more electrons you lose, you will start to go crazy, become extremely unstable, and retaliate. As a result, one after another stains, plaques, etc. are left on your face, and your face begins to grow wrinkles, become loose and dull.

There are some free radicals and antioxidant substances in our body, which include some enzymes such as superoxide dismutase (SOD), catalase, glutathione peroxidase, vitamin C, vitamin E, and reducing properties. Glutathione, carotene, active selenium,etc.

Among them, glutathione plays an important role in the body's biochemical defense system and has many physiological functions. It can not only eliminate free radicals in the human body, but also improve the immunity of the human body. Glutathione maintains health, resists aging, and can also protect hemoglobin from oxidation by hydrogen peroxide and free radicals so that it can continue to perform its ability to transport oxygen normally.

Part of the hemoglobin in the red blood cells is oxidized to ferric iron by hydrogen peroxide and other oxidants, which converts hemoglobin into methemoglobin, thereby losing the ability to carry oxygen. Reduced glutathione can directly combine with hydrogen peroxide and other oxidants to generate water and oxidized glutathione, and it can also reduce methemoglobin to hemoglobin. There is a lot of glutathione in human red blood cells, which is of great significance to protect the sulfhydryl group of the protein on the red blood cell membrane in a reduced state and prevent hemolysis.