The main function of rosemary is anti-oxidation. Relevant studies have shown that rosemary extract can improve the activity of antioxidant enzymes in Drosophila, inhibit lipid peroxidation, and have anti-aging effects. In addition, the rosmarinic acid and carnosic acid in rosemary extract have a strong affinity with natural organic fats, so rosemary is often combined with organic fats to make gel products.

Among them, rosmarinic acid, an important ingredient in rosemary extract, is one of the most important and widely used ingredients in the beauty and skin care industry. Rosmarinic acid has strong antioxidant activity, and its antioxidant activity is stronger than vitamin E, caffeic acid, chlorogenic acid, folic acid, etc. It can effectively remove active oxygen in environmental pollution, inhibit the formation of melanin, and have the effect of whitening and moisturizing.

At the same time, the addition of rosmarinic acid in skin care products can brighten the skin and reduce wrinkles. Rosemary extract can stimulate the metabolism of local skin and promote the metabolism of some waste products in the skin. Can increase skin moisture, make skin shiny and supple. With regular use, the skin will be youthful and radiant.

Rosemary extract is a natural antioxidant that not only acts as a natural and safe preservative in the beauty industry, but also prevents pollution, replaces artificial antioxidants, and helps reduce the amount of preservatives in formulas. It can also help improve the shelf life of food and feed. 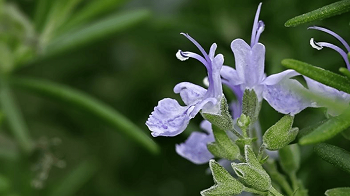 Rosemary leaf extract application in the field of food processing

Rosemary and its extracts can well prevent oxidation reaction in meat food processing and protect the flavor of processed food.

Relevant studies have shown that the addition of rosemary extract to various meat products during heating or storage can not only make the corresponding meat products have excellent antioxidant capacity, but also prevent meat products from spoilage and protect the original flavor of meat products. .

Rosemary and its extracts have antioxidant properties, which are very stable and non-volatile, and at the same time, it has a certain control effect on taste and aroma.

Rosemary and its extracts have strong dissolving ability. It can be made into fat-soluble products and water-soluble products. Therefore, it has strong adaptability in food applications and can stabilize oils and essential oils in food processing. .

In addition, the active ingredients in rosemary and its extracts have higher boiling points and lower aroma thresholds. Therefore, the cost can be reduced by reducing the dosage in production.

The properties of rosemary and its extracts make it widely used in food processing. It can inhibit the decay of food and slow down the fading rate of carotene in food; in terms of flavor improvement, the flavor of natural rosemary can reconcile other flavors in food, and can prevent precooked and crushed poultry, meat and fish. Produces an overcooked taste and improves the flavor of low pH sauces and has applications in food and food processing.

An experimental study conducted by Yesil-Celiktas and other biologists in 2010 found that rosemary food antioxidants can control the growth, development and spread of somatic cells in the body of cancer diseases, especially liver cancer, prostate tumors, early liver cancer and diffuse spinal cord sepsis . But at the same time, it was also found that some chemicals in rosemary extract are likely to have an impact on some anti-tumor drugs in the body of patients with malignant tumors who have been treated.

With the gradual advancement of research on rosemary, an article published in the journal Biochemistry and Cell Biology in May 2016 emphasized that researchers at the University of Pisa in Italy discovered that the rat tail contained in rosemary Oxylin can stimulate the protein P53 again. P53 egg white is a very critical tumor suppressor egg white, which can inhibit the development trend of 50% of tumor cells in the human body and make them inactive. This study is the first to demonstrate that carnosol in rosemary can have an inhibitory effect on tumor cells, a discovery that has major and practical hazards to molecular structure research in health and pharmaceutical industries.

Carnosic acid is a pure natural anthocyanin extracted from the green plant of rosemary, and has received widespread attention for its pharmacological activities such as antioxidant, anti-infection and anti-tumor. Recently, a paper by Xu Qiang's research group of Southeast University revealed that carnosic acid inhibits the infiltration of MDSCs, improves the effect of CD8 T somatic cells, and has the effect of improving the anti-lung cancer effect of cisplatin. Studies have shown that carnosic acid induces apoptosis of renal tumor cells based on the membrane protein channel of ROS receptors, and induces autophagic cell death of early hepatoma cells based on inhibition of AKT/mTOR channels. In addition, carnosic acid can improve the antitumor efficacy of other drugs.

The practical effects of rosemary on cognitive and physical well-being have been recognized in Europe since ancient times.

In the TBS physical and mental health entertainment program "Job tune" launched in Japan on July 2, 2016, an authoritative expert on dementia indicated that the aroma of rosemary can reasonably prevent the occurrence of dementia. The expert professor showed that once the brain neurons of patients with dementia are blocked, the role of the hippocampus, which is responsible for memory storage, will be inhibited. Because the hippocampus is connected to the gap of the nervous system that senses taste, the hippocampus can be stimulated according to a stimulating taste, thereby having a practical effect of preventing dementia.

In addition, experts have also carried out tests and studies on the application of rosemary to reduce Parkinson's. A study in Spain found that rosemary chemicals play a key role in preventing damage to some nerve cells in Parkinson's patients, published in the journal Cell and Molecular Neurobiology in 2010.

Researchers have shown that the antioxidant properties of carnosic acid can induce anti-inflammatory activity in the central system, thereby fully exerting the effect of maintaining the nervous system. In addition, the anti-inflammatory properties of rosemary extract can also have neurological maintenance effects. This experiment is the first time to confirm that rosemary extract can reduce the cognitive dysfunction related to mild traumatic brain injury, so the research results have a particularly critical research value.

Fragrance-releasing chemicals in rosemary leaves have long been used to strengthen memory and improve concentration. A study by Northumbria University in France showed that the unique smell of rosemary can improve everyone's memory ability, improve retrospective memory and innovative memory. The unique smell of rosemary comes from 1,8-cineole, a chemical in green plants. This unique chemical facilitates the production of memory-related compounds in the body's human brain, thus improving memory to a certain level. In addition, the detection of some cognitive ability properties also showed that rosemary extract can enhance and regulate the cognitive ability and personal behavior in the whole process of human aging. It is said that when the ancients could not find the direction when they went out and set sail, the seafarers of Mystery Voyage could rely on this strong fragrance to find parts on land.

Rosemary has a distinctive aroma, which can relieve headaches to a certain extent. Headaches and dizziness caused by excessive life stress can be relieved with rosemary. In fact, rosemary aromatherapy oil and chemicals have long been used in aromatherapy to reduce stress and relieve anxiety. In addition, rosemary tea is a great option for reducing stress and can help the body reduce tension headaches or depression.