Rhodiola contains salidroside, tyrosol, ketone and other functional ingredients. Since Rhodiola root contains high content of phenolic components, it shows strong and broad-spectrum antioxidant properties, can be used as antioxidants, and has anti-aging effects; it has inhibitory effects on aromatase and lipase, indicating that It has a good weight loss effect; it has a certain inhibitory effect on tyrosinase, indicating that it has a whitening effect; at the same time, it can be used as an anti-inflammatory agent and a moisturizing agent.

The effective radiation protection of Rhodiola can be used by professionals and people who work with computers for a long time, and it can also improve the immunity of the individual.

The active ingredients in Rhodiola can well promote the human body's hemoglobin and oxygen to be fully combined, so that some oxygen in the body can enter the blood, thereby reducing the oxygen consumption of human blood for oxygen. , In this way, the effect of enhancing the activity of superoxide dismutase can be achieved, so that the effect of promoting blood circulation can be achieved naturally.

Because the blood rich in oxygen is relatively red, and the blood circulation in the capillaries is relatively lively, which can make the skin appear more rosy, so that your skin can exude a different kind of vitality and appearance. Therefore, many friends who insist on using Rhodiola will find that their skin becomes much more supple than before using this cosmetic. 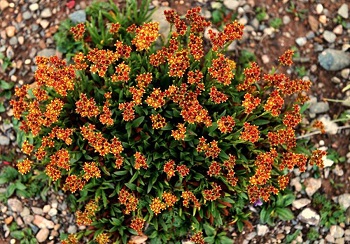 Because Rhodiola has very good antibacterial, astringent and analgesic effects, the use of cosmetics containing Rhodiola can protect the damaged cells of the skin, which can naturally ensure some acne to a large extent. Acne or other skin problems caused by inflammation can stay away from you, thus ensuring that your skin becomes more perfect.

When Rhodiola rosea extract is added to skin care products, it can increase the oxygen content of the blood and promote the combination of hemoglobin and oxygen, thus achieving the effect of promoting blood circulation and making our skin look more rosy and shiny. Rhodiola rosea extract itself has a certain antibacterial effect, and also has a certain analgesic and astringent effect. Therefore, the use of skin care products containing this ingredient can repair and protect damaged skin. The role of cells, aimed at common skin acne and inflammation problems, can also play a role in improvement and prevention, making our skin healthier.

Rhodiola can delay cell aging, increase the activity of sod in the body, and inhibit the formation of intracellular lipofuscin and reactive oxygen species. Enhance cell metabolism and synthesis, improve cell viability. In addition, it also has the effect of beautifying skin care.

Everything in life needs oxygen, so hypoxia is the source of all diseases. Rhodiola can reduce the overall oxygen consumption rate of the body, improve the brain's tolerance to hypoxia, and at the same time increase the oxygen-carrying capacity of the blood, increase the body's disease resistance, and make the diseased tissue recover quickly.

Rhodiola rosea has obvious inhibitory effects on the growth of various tumors and the metastasis of cancer cells.

Rhodiola rosea contains a lot of scopolamine, kaempferol and other antibacterial and anti-inflammatory ingredients; it also has the most tannin content, which is astringent, plays a protective role on the mucosal surface, prevents excessive secretion, stops excessive bleeding, and has a good effect on lung inflammation. Cough, expectoration and increased leucorrhea in women have curative effect.

Arthritis is caused by the three evils of wind, cold and dampness. A large number of clinical trials have proved that Rhodiola can drive away wind, resist cold, eliminate pain, and especially have obvious anti-swelling and inhibitory effects on joint swelling.

Rosacea has been found to inhibit stress-induced depletion of important brain neurotransmitters. Rhodiola's adaptive properties are largely attributed to its ability to affect neurotransmitter levels and activity, as well as amino acids such as beta-endorphins that mimic the effects of opioids in the brain. Because it is an adaptogen, Rhodiola can normalize neurotransmitters in the central nervous system without causing drowsiness or fatigue. In other words, it helps maintain normal levels of brain chemicals.

At the same time, Rhodiola has positive effects in cases of decreased work performance, loss of appetite, sleep disturbance, irritability, and fatigue. Research has found that supplementation with Rhodiola improves mental performance. Taking Rhodiola during exams, their concentration and performance improved, their sense of well-being increased, their sleep quality improved, and their mood was more stable. In addition to helping with sleep, Rhodiola can improve mood, reduce occasional worry and tension, and allow people to work more effectively under stress.

Studies have shown that one of the main mechanisms of action of Luosaiwei may be related to the inhibition of monoamine oxidase. Monoamine oxidases are a class of enzymes that bind to the outer mitochondrial membrane. Monoamine oxidase is involved in the oxidative breakdown of various components and neurotransmitters in the system, including dopamine, norepinephrine, and serotonin. By blocking monoamine oxidase, it may cause a significant increase in certain neurotransmitters, especially serotonin and dopamine. In addition to promoting the body's natural circulatory processes, serotonin is also responsible for regulating mood, especially well-being. Dopamine is responsible for a variety of functions, including motor and emotional responses, but its most prominent function is the control of the pleasure center. By potentially increasing dopamine and serotonin, Rhodiola can relieve stress and promote feelings of well-being. Increases in serotonin and dopamine can also improve your focus, concentration, and overall cognitive function.

6. Promote fat decomposition and achieve the purpose of weight loss.

Studies have found that Loxavir may also act as an active compound that supports weight loss. Research has shown that Loxavit boosts hormonal lipase, an enzyme that breaks down adipose tissue or fat, especially around the abdomen. The breakdown of fat in the stomach may increase when Loxavit is combined with strengthening exercise.

Rhodiola rosea extract (salidroside) inhibits the activity of tyrosinase and reduces its catalytic rate, thereby reducing the production of melanin in the skin, improving the state of skin pigmentation, and achieving skin whitening effects. Rhodiola rosea extract (salidroside) has excellent water solubility and can be added to cosmetic systems as a water-phase component. The heating temperature is generally 40-90 °C. The high content of phenolic components in Rhodiola root shows strong and broad-spectrum antioxidant properties, which can be used as antioxidants and have anti-aging effects; it has a certain inhibitory effect on tyrosinase, indicating that it has a whitening effect; Also acts as an anti-inflammatory and humectant.