Home / News / What are the applications of silk fibroin

What are the applications of silk fibroin

About silk fibroin you don't know

Silk is coagulated by the silk fluid secreted from the silk glands in the silkworm. Silk fibroin is the main body of silk, accounting for about 70% to 80% of the silk quality. It is a natural biological macromolecule with no physiological activity. It is formed by connecting multiple amino bonds, and its molecular weight is generally considered to be about 3.7×105.

Silk fibroin contains 18 kinds of amino acids, of which glycine, alanine and serine account for about 85% of the total number of amino acids. chain, about 26 kD) of natural macromolecular fibrin.

A disulfide bond is formed between the cysteine ??residue at position 20 of the C-terminal of the H chain and the cysteine ??residue at position 172 of the L chain to bind the two. In addition, there is a glycoprotein (P25) with a molecular mass of about 30 kD and the complex of H chain and L chain is bound by hydrophobic interaction, and the molar ratio of H chain, L chain and P25 is 6: 6: 1 . In the H chain, 94% of the sequence is a highly repetitive crystalline region, and the remaining part includes the N-terminal sequence (signal peptide), the linking part between the crystalline regions, and the C-terminal sequence.

The amino acid sequence in the crystalline region is mainly composed of hexapeptide repeats (Gly-Ser-Gly-Ala-Gly-Ala), forming an anti-parallel β-sheet structure. Silk fibroin is composed of crystalline state and amorphous state in the aggregated state, and the crystalline state can be divided into silk I and silk II. The antiparallel β-sheet structure belongs to silkⅡ, which is an orthorhombic crystal system; silkⅠ is an intermediate form between α-helix and β-sheet, and the stereo conformation is crank-shaped. , the change of the solvent may make silk I into silk II. 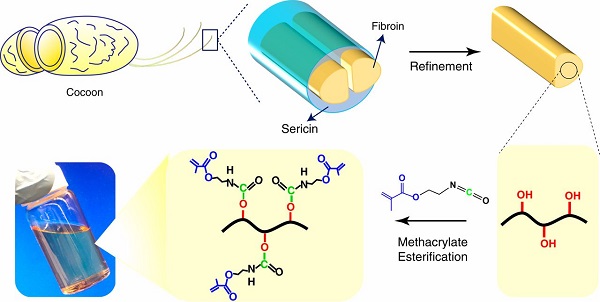 In addition, there is a crystalline silk III, which is found in the silk fibroin film formed between the silk fibroin solution and the air interface, which is an intermediate form between silk I and silk II. The above-mentioned unique structure of silk fibroin makes it have many special properties. Silk fibroin not only has good biocompatibility and degradation properties, but also has the characteristics of easy processing and modification, non-toxic degradation products and low immunogenicity, and the mechanical strength of silk fibroin materials is also significantly better than other biological materials.

1. Research on the application of silk fibroin in the field of biosensors

A biosensor is an analysis system composed of biologically active material as a sensitive element and an appropriate transducer. Immobilization of biologically active enzymes is an essential step in the preparation of almost all types of biosensors. The silk fibroin membrane prepared from silk fibroin is an excellent immobilized enzyme carrier, and many studies have been reported in its application in biosensors. Silk fibroin membrane as an enzyme immobilization carrier began in 1978. 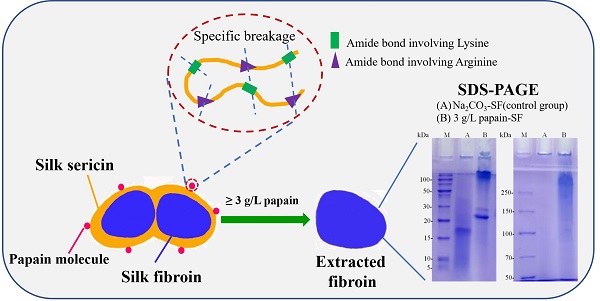 Organophosphorus pesticides can combine with cholinesterase in the body to form stable phosphorylated cholinesterase through organophosphate, thereby inhibiting the activity of cholinesterase in the human body, so that acetylcholine produced by normal nerve activity cannot be decomposed immediately. Human poisoning and death. Therefore, it is an effective anti-virus way to first react with the poison in vitro, so that it loses the ability to enter the body for destruction. With acetylcholinesterase as the detoxification enzyme and silk fibroin solution as the enzyme carrier, the treated fabric has good anti-virus effect, and can be stored for a long time under suitable temperature conditions, and when distilled water is used as the enzyme carrier, it can also be used. The fabric has good anti-virus effect, but its anti-virus effect becomes worse with the increase of time.

It shows that when the silk fibroin solution is used as the synthetic biological enzyme protectant, it can directly react with toxic substances (organophosphates) and combine into stable phosphorylated cholinesterase to block the damage of the toxic agents to the human body. Studies have shown that it is feasible to use silk fibroin solution as a biological enzyme protectant, which has a good anti-virus effect and can make the enzyme have a longer storage life.

The "artificial skin" wound protective film made of silk fibroin film and fresh pig skin were compared in rabbits. The results showed that the performance of silk fibroin film was better than pig skin. In clinical trials of deep II degree wounds and superficial II degree wounds, it has good moisture permeability and adhesion to the wound surface, which promotes wound healing. In terms of biological properties, it has strong bactericidal properties, good adhesion between the drug silk fibroin film and the body surface, meets the requirements of wound covering and is non-toxic, has no irritating effect on the skin, and has a cytotoxicity. The protection and treatment of skin injury wounds such as plastic skin extraction areas can basically meet the application of scaffold materials, but they are far inferior to natural polymers in terms of biocompatibility and cell adhesion.

Compared with other natural polymers, silk fibroin has obvious advantages. Studies have shown that it has good biocompatibility, non-toxic, non-polluting, non-irritating and biodegradable. Therefore, many scholars are devoted to research and develop new fields of silk fibroin application. Silk fibers have been used as textile fibers for thousands of years, and they have been used clinically, such as surgical sutures, for decades. Since silk fibroin was found to have unique physicochemical properties and good compatibility with the human body, it has been extensively studied as a food additive and in cosmetic applications. In recent years, it has been gradually discovered that silk fibroin has more potential, such as application in biosensing, biomedical materials, soft tissue compatible materials, tissue engineering and other fields, and new progress has also been made in traditional fields.