What is rhodiola salidroside?

Rhodiola is a perennial herb or subshrub wild plant. It is widely distributed on high-altitude rocks and cliffs in Europe, Asia and North America. Rhodiola has a long history of use in China. As early as the Qing Dynasty, Rhodiola rosea was used as a nourishing and strong medicine to relieve fatigue and resist the cold.

Rhodiola extract is used as a cosmetic ingredient for skin care

Its main active ingredient is salidroside. It has anti-oxidation, whitening and anti-radiation effects. Cosmetics are mainly made from the dried roots and rhizomes of Rhodiola.

As an ingredient in organic skin care products, Rhodiola is an adaptogen that helps the skin resist daily stress. It can help the skin cope with environmental stress caused by extreme changes in temperature and oxidative stress caused by sun exposure. *It can improve the oxygen consumption of the skin, enhance cell vitality and respiration. If you live in an extreme temperature climate, or even work in an environment with a powerful climate control system (freezing office air conditioners, anyone?), Rhodiola can help your skin adjust and maintain balance, even if your surrounding environment changes. 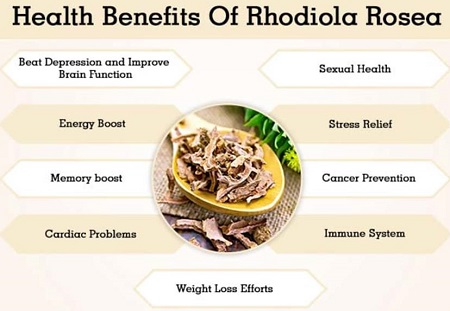 Rhodiola has a stimulating effect on fibroblasts in the dermis. It can promote the division of fibroblasts and secrete collagenase as well as collagen. Thereby decomposing the original collagen; but the total secretion is greater than the decomposing amount. Collagen forms collagen fibers outside skin cells. The increase of collagen fibers shows that Rhodiola has a certain anti-aging effect on the skin.