What is N-acetylneuraminic acid?

N-acetylneuraminic acid, also known as sialic acid (SA), bird's nest acid, is a naturally occurring amino sugar, which was originally isolated from bovine submandibular adenomucin, hence the name sialic acid. Sialic acid is a nine-carbon monosaccharide derivative containing an amino group, and is a general term for all N- or O-derivatives of neuraminic acid or keto-deoxynonyluronic acid (KDN). Sialic acid usually exists in the form of oligosaccharides, glycolipids or glycoproteins, mainly in the form of short-chain residues at the ends of glycoproteins and glycolipids. 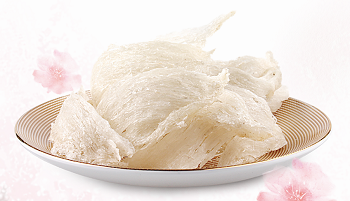 Sialic acid is an important component of gangliosides in the brain. The content of sialic acid in nerve cell membranes is 20 times that of other cells. Because the transmission of brain information and the conduction of nerve impulses must be achieved through synapses, sialic acid acts on the brain. Brain nutrients for cell membranes and synapses, so sialic acid promotes the development of memory and intelligence. In recent years, further systematic research on sialic acid by scientists has found that the content of sialic acid in human brain cells is 2-4 times that of other animal brain cells, so the intelligence of the human brain is much higher than that of all other animals.

Sialic acid has protective and stabilizing effects on nerve cells. Some neurological diseases, such as early senile dementia and schizophrenia, will reduce the content of sialic acid in the blood or brain of patients. After recovery from drug treatment, the content will return to normal, because sialic acid is involved in neural activity. Gangliosides synthesized from sialic acid have a certain curative effect on the treatment of cerebral ischemia, Parkinson's disease and neurotrauma. Monosialogangliosidase is also effective in the treatment of cerebral ischemia, Parkinson's syndrome, Alzheimer's disease and neurotrauma. Recently, researchers have tried to synthesize some sialic acid derivatives for the treatment of certain neurological diseases.

Between molecules and cells, between cells and cells, and between cells and the outside world, sialic acids at the ends of sugar chains can either serve as recognition sites or mask recognition sites. Sialic acid has an extremely strong negative charge, which makes red blood cells and other cells repel each other, avoiding meaningless cell interactions in the blood circulation. Therefore, sialic acid can improve the intestinal absorption of minerals and vitamins, and supplementation of sialic acid can enhance the body's absorption of nutrients.

Due to the special structure of the 9-carbon amino sugar of the sialic acid molecule, there is no enzyme that degrades the substance in the digestive tract system. Therefore, the polypeptide conjugate formed by it will not be degraded by the enzymes in the digestive tract when it passes through the digestive system, and then enter the intestine. In the intestinal tract, specific sialic acid polypeptide conjugates can form competitive binding with pathogenic bacteria, toxins and virus particles entering the intestinal tract, thereby preventing intestinal toxins, pathogenic bacteria and virus particles from binding to intestinal mucosal cells. .

When tissue is inflamed or lost, white blood cells gather around the inflamed tissue to play an antibacterial and anti-inflammatory effect. In the 1990s, American scientists discovered that the aggregation of leukocytes was related to the process of cell adhesion, and the process of cell adhesion was related to the E-Selection of vascular endothelial cells, a sialic acid-containing tetrasaccharide box on the surface of leukocytes. Therefore, the synthesis of some sialic acid derivatives with simpler structures and more effective than tetrasaccharides as adhesion drugs to treat inflammation will become a research hotspot.

Sialic acid will not be degraded by enzymes in the digestive tract, and the glycoprotein it forms can block the attachment of pathogens (viruses, bacteria and bacterial toxins) to epithelial cells, improve cell discrimination, detoxify cholera toxins, and prevent pathological colons. Bacterial infection, regulating the half-life of blood proteins, thereby effectively improving the immune function of the human body. At the same time, sialic acid can improve the intestinal absorption of vitamins and minerals, and improve the immunity of infants and mothers.

Sialic acid sweets are very popular in Japan. Because it is extracted from bird's nest, the price is so high that the candy cannot be priced as a normal lollipop. Sialic acid is used as a nutritional supplement in candy, another important application of sialic acid: anti-influenza virus. Gum with sialic acid can be a good idea to deal with flu season viruses.

Ointments and sprays containing sialic acid have been developed in Japan to maintain healthy hair growth. Due to the antioxidant effects possessed by sialic acid, which has been found in recent studies, it can be reasonably added to cosmetic products such as facial lotions and masks.

In addition to playing an important role in the treatment of nervous system diseases, sialic acid and its derivatives also play an important role in inhibiting sialidase and anti-influenza virus and anti-rotavirus. The main anti-influenza drugs on the market now, such as zanamivir (Elewei), peramivir, oseltamivir (Tamiflu), and the new drug laninamivir, which was launched in Japan in 2010, all belong to neuraminic acid Enzyme inhibitors, which can effectively inhibit the spread of the virus in the body, have therapeutic effects on the new type of influenza.