What is shea butter?

Shea butter contains 40%~50% vegetable oil, which also contains non-saponified repairing ingredients. Generally, the content of vegetable oil is less than 1%, and the proportion of such ingredients as shea butter is as high as 15%. It is not easy to be washed off by soap and facial cleanser, and it can also provide antibacterial and soft skin functions.

Shea butter is also rich in natural antioxidants, vitamins A, D, E, phytosterols, etc. It is rich in natural maintenance ingredients, so that shea butter can provide excellent moisture for the skin, as well as on the surface of the skin. Forms a protective film to provide the most natural protection.

1. Separation/Cracking: The outer flesh of the fruit is removed, and when dry, the part of the shea butter from the nut must be separated from the outer shell. This is a social activity traditionally in which female elders and little girls sit on the ground and break the shell with small stones.

2. Crushing: To make the shea nuts into oil, they crush the nuts. Traditionally, this is done with a mortar and pestle. It requires lifting the pestle and grinding the nuts into a mortar to crush it so it can be baked.

3. Roasting: The crushed nuts are roasted over a wood fire in a huge pot. Those pans have to be stirred constantly with a wooden paddle so that the shea butter doesn't burn. Those oils are heavy, hot, and smoky to stir while baking, and need to be done in the sun. This is the origin of the slightly smoky flavor of traditional shea butter. 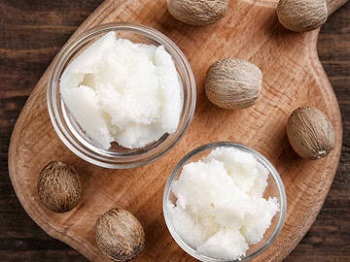 4. Grinding: The roasted shea is ground to a smoother paste; gradually add water and mix the paste well by hand.

5. Separation: Those pastes need to be kneaded by hand in a large basin, and water is added gradually to help separate out the shea butter. When they float to the top, the shea butter in its curd state is removed and the excess water is squeezed out. Those curdled shea butters are melted in a large open basin over slow heat. The slow cooking time will evaporate any remaining moisture.

6. Gather and shape: At this point, the creamy or golden shea butter is scooped from the top of the pan with a large spoon and set in a cool place to harden. It is then formed into a spherical shape.

In industry, mechanical shelling, for example, a universal nut sheller can be used. Refined shea butter can be extracted using chemicals such as hexane or ceramic water filters.

Shea butter is a pure natural vegetable oil, mild and non-irritating, even for sensitive skin. It is very similar to the oil secreted by the human body and is very easy for the skin to absorb.

Shea butter has a large amount of oil and non-saponified repairing ingredients, which can prevent dryness and cracking of the skin, and can also provide deep moisturizing effect to keep the skin in a natural and supple state.

Shea butter contains "cinnamic acid", which is a natural sunscreen ingredient. There are also some latex substances in non-saponifiable compounds, which can effectively absorb UVB ultraviolet rays in the sun and prevent the sun from directly damaging the skin.

Shea butter contains a lot of non-saponified ingredients and rich vitamins A, D, E, F, which can supplement enough nutrients for the skin, can help the collagen in the dermis of the skin, promote the regeneration of epidermal cells, avoid skin aging.

The vegetable oils contained in shea butter can stay on the surface of the skin, creating a natural protective layer for the skin, isolating external stimuli, and reducing the loss of moisture in the skin.

Shea butter is mainly used in skin and hair related products in the cosmetic industry, such as lip gloss, body balm, lotion, conditioner for dry and brittle hair, etc.

It is also used in soap making, especially in small amounts (5-7% oil in the formula) because it has ample unsaponifiables, and high doses will soften the soap but reduce its ability to clean. Some artisan soap makers utilize 25% shea butter – about 28% compared to the EU maximum, but this is rarely the case in commercially produced soaps due to the cost of palm or olive oil higher. It's a great emollient balm for people with dry skin conditions, and while there's no evidence it's a cure, it relieves the pain and itching associated with tightness.

In some African countries such as Benin, shea butter is used in cooking, as a waterproofing wax, in hairdressing, in candle making, and as an ingredient in medicinal ointments. It is also used by traditional African percussion makers to increase the durability of wood (such as carved shells), sand hammers, and leather adjustment straps.

In the UK and other countries, it is contained in various product ingredients, such as toilet paper.