Are liposomes natural and safe?

What is a liposome? 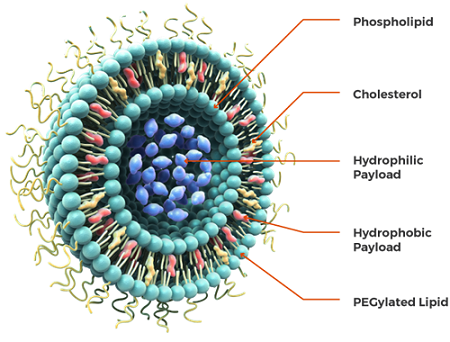 Liposome is a kind of drug delivery vehicle, which can be used to formulate a variety of natural, synthetic and modified lipid types with a variety of drugs for the delivery of drugs and contrast agents. There are more than 15 types of liposome drug formulations in the market for indications, such as cancer, fungal infections, macular degeneration, pain management and vaccines.

Cell membranes are usually composed of phospholipid bilayers. This double layer contains a hydrophilic or "hydrophilic" head group, and a lipophilic, or "fat-loving" tail, consisting of a long tail consisting of a hydrocarbon chain repelled by water. Therefore, phospholipids are classified as hydrophilic and hydrophobic components of amphiphilic molecules due to the presence of both.

When the phospholipid bilayer cell membrane is in contact with water, the head group is attracted by the water and forms a surface facing the water. At the same time, the lipophilic tail is repelled by the water and then forms a surface opposite to the water. Within a single cell, one layer of the head group faces the outside of the cell, and the other layer of the head group faces the internal cell environment. Hydrocarbons are connected to the two-layer pole group with the tail facing each other, thereby forming a double-layer structure of the cell membrane.

The composition of resveratrol liposome

Liposomes can be composed of natural-derived phospholipids and mixed lipid chains, such as egg phosphatidylethanolamine, or pure surfactant dioleoylphosphatidylethanolamine (DOP). It is common that liposomes also contain a core aqueous solution, which is bilayered by one or more. The phospholipid bilayer of liposomes can be derived from natural sources, is biologically inert, immunogenic, and exhibits low inherent toxicity.

The name liposome is derived from the two Greek words "liposome" which means fat and'soma' which means body. The size of liposomes can range from 0.025 microns (μm) to 2.5 μm vesicles. In order to determine the lifespan of a half-liposome, researchers must consider both the size and number of liposomes present in the bilayer in the liposome, because both characteristics play an important role.