Home / News / How much do you know about rosmarinic acid?

How much do you know about rosmarinic acid?

What is rosmarinic acid powder?

Rosmarinic acid is a water-soluble natural phenolic acid compound isolated from rosemary, a plant of the Lamiaceae family. Among the various plants of the Umbelliferae, the highest content is especially in the Lamiaceae and the comfrey.

Rosmarinic acid has a strong scavenging activity of free radicals in the body and an antioxidant effect. Studies have shown that its mechanism of action is: rosmarinic acid competes with unsaturated fatty acids to combine with lipid peroxy groups to terminate the chain reaction of lipid peroxidation and reduce the rate of lipid peroxidation, while rosmarinic acid is oxidized to Quinoid; marinic acid inhibits neutrophil respiratory burst and inhibits lysosome release by reducing intracellular calcium ion concentration; inhibits endothelial cell-mediated low-density lipoprotein oxidation. The antioxidant effect of rosmarinic acid is related to its structure. Studies have shown that the hydroxyl group of ortho-diphenol is the material basis of free radical scavenging activity. And the conjugated double bond at the C3 position has a synergistic effect. 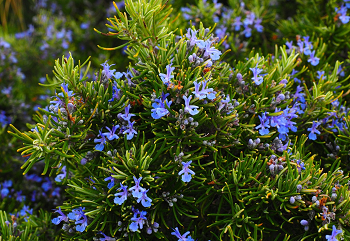 Rosmarinic acid has antidepressant effects in animal models of depression. Experiments were performed on cell proliferation in the hippocampus of mice, and bromodeoxyuridine antibody was used for immunohistochemical analysis to explore its mechanism of action. It was found that in the rosmarinic acid treatment group, the labeled proliferative cells increased, combined with the forced swimming of depression animal models. Experiments have shown that rosmarinic acid proliferates and produces an antidepressant-like effect at least in part through the proliferation of new cells in the hippocampus.

(3) Inhibition of mold: Rosmarinic acid extracted from plants has an inhibitory effect on Phytophthora and its mold spores that cause soil-borne diseases, effectively reducing the germination of zoospores.

(2) Anti-hepatitis effect: Rosmarinic acid can alleviate lipopolysaccharide (LPS)-induced liver injury and significantly inhibit the increase of plasma transaminase levels, which proves that the liver protective effect of rosmarinic acid is through the removal or reduction of superoxide. or oxidized nitrite rather than by inhibiting TNF-α.

6. Anti-cancer and anti-tumor effects of rosmarinic acid: Rosmarinic acid inhibits the expression of CCL11 and CCR3 by inhibiting the activity of β-kinase and the activation of related genes by nuclear factor kappa B, so as to achieve the purpose of anti-tumor.

Rosmarinic acid has strong anti-inflammatory activity, while rosmarinic acid also has antibacterial, antiviral, antitumor activities, and has the properties of inhibiting acute and chronic infections, anti-ultraviolet rays, and inhibiting elastin degradation. Acids become additives in cosmetics. At present, rosmarinic acid has shown its important application value in the fields of pharmacy, food, cosmetics and so on.

As a natural and efficient antioxidant, rosmarinic acid can replace BHA and BHT in animal and vegetable oils, dairy products, oil-rich foods, candy and baked foods; it can also be used as a spice in various soups and flavored foods; And both antiseptic and antibacterial effect. In Japan, rosmarinic acid-rich shiso extract is used as a garnish to improve the shelf life of fresh seafood.

It can be used in skin care products to remove freckles, anti-oxidation, increase skin elasticity, and delay aging; when used in shampoos and hair care products, it can promote scalp blood circulation, improve hair loss, and reduce the occurrence and irritation of dandruff Hair grows and moisturizes. Therefore, rosmarinic acid can be used as an excellent additive in cosmetics.