(3) New hair can grow in the hair follicle after the old hair falls off;

(4) People can experience about 25 cycles of hair growth in their lifetime;

(5) After a person is born, the number of hair follicles on the scalp will not increase;

(7) The stratum corneum of the scalp is thinner than the skin of the face, and factors such as sun exposure and external force are more likely to cause scalp damage and inflammation.

2. The causes of dandruff and the mechanism of anti-dandruff

There are three main factors that cause dandruff: Malassezia, sebum, and individual susceptibility.

Dandruff is actually the premature shedding of abnormally keratinized skin surface cells. Normal basal cells renew to the outermost layer until they fall off, a process that takes about 28 days. 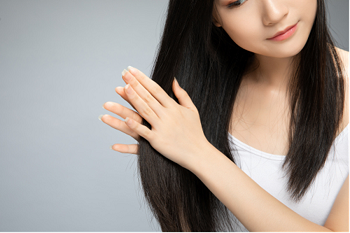 If Malassezia on the scalp proliferates excessively, it rapidly consumes sebum and decomposes unsaturated fatty acids, resulting in an inflammatory response in the human body; after the inflammatory response occurs, the proliferation of scalp cells is abnormally accelerated, and the cells on the surface have not been fully keratinized. The cells swarmed again, eventually leading to the shedding of large areas of the surface layer, which is what we see as dandruff. These processes are shortened to 7-21 days.

The oil secretion and individual susceptibility of the scalp are inherent and not easy to change; therefore, most anti-dandruff ideas are to use antifungal ingredients to inhibit Malassezia.

For a long time, it was basically believed that Malassezia was the main cause of dandruff; in recent years, there have been some new opinions, such as excessive degreasing of the scalp, and dry scalp caused by too low moisture.

Removes established dandruff by accelerating the exfoliation of the stratum corneum. Salicylic acid is a widely used anti-dandruff ingredient in the early days, and it has been used less in the past ten years.

It can inhibit the excessive proliferation of keratinocytes, but the irritation and allergy rates are very high, and shampoos for more than ten years basically do not use such ingredients.

The effect is good, but the cost is not low, shampoo is used less, and OTC products are more commonly used;

Piroctone olamine is commonly known as OCT, a new type of anti-dandruff agent. It has good effect, much lower irritation than ZPT, and its price is several times higher than ZPT. Therefore, it can be seen in some anti-dandruff products with high positioning. L'Oreal's anti-dandruff products are relatively more common. Some. There are even many acne products that use OCT as a fungicide.

Also known as Ganbaosu, once one of the main anti-dandruff agents, after the rise of Procter & Gamble and the anti-dandruff shampoo that mainly promoted the ZPT system, its dominant position was gradually replaced by ZPT, and the old products are still in use.

That is, don't blindly pursue high-foaming shampoos, and don't wash your hair with water that is too hot, which will easily lead to excessive degreasing of the scalp, which will lead to more dry dandruff.

This is especially true for boys. Many boys' hair has not been fully foamed, and it is flushed with a wow.

In addition, the conditioning ingredients of conditioners, cationic conditioning agents, have a certain stimulating effect on the scalp, which may aggravate scalp inflammation and also lead to increased dandruff. So girls with dandruff, it is recommended to use conditioner with caution. If the hair is very dry and frizzy, you can use it again the next day, and pay attention to less contact with the scalp, or use a hair oil.