Ginger Extract is an effective drug for the treatment of hydrochloric acid-ethanol ulcers, and its effective ingredient is ginger, and has the effect of protecting gastric mucosa cells. In aromatic gastrointestinal drugs, especially in Jiangke plants contain Ginger Extract and other terpenoids, it is one of the effective ingredients of Jose. The secretion of Ginger Extract decoction on dog sposic acid and gastric juice is inhibited and excited, and inhibition within the first few hours, it will follow the excitement of longer. Ginger Extract branches (10%) 1.2 mg / only to rats can significantly inhibit hydrochloric acid and shoulder gastric mucosa damage, after blocking PG synthesis, the protective effect of Ginger Extract disappears, indicating that the protection mechanism may Related to promoting gastric mucosa synthesis and reducing endogenous PG. 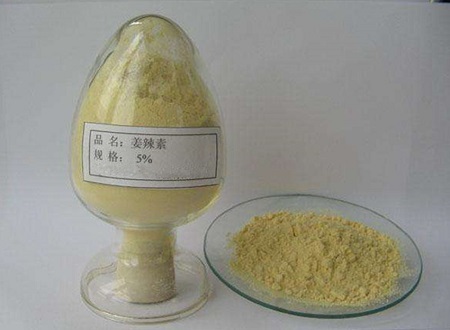 Ginger Extract can act in sympathetic nerves and vagus nervous systems, and there is a role in suppressing gastrointestinal and direct excitement. The absorption of sulfamer was studied using rat intestine repurcation method. The results showed that the water extract of Ginger Extract has significant absorption to promote its bioavailability and give full play to the efficacy.

The Ginger Extract alcohol extract is excited to the anesthetic cat vascular movement center and the breathing center, which also has direct excitement to the heart. Normal people chew Ginger Extract 1g (did not swallow), which increased the average of 1.489 kPa (11.2 mmHg), and the diastolic pressure rose 1.862 kPa (14mmHg). There was no significant impact on the pulse ratio.

The water extract of Ginger Extract can significantly reduce the amount of human platelet marker peanut (AA) to form TXB2 and PGS, reducing the formation of peroxides within PG, and has a strong inhibiting platelet aggregation.

The role of the central nervous system

Ginger Extract has an inhibitory effect on the central nervous system. Ginger Extract oil can significantly inhibit spontaneous activity of mice, prolong the sodium sleeping time of glutarbar, anti-glurential nitrogen convulsions, analgesia, and reduce yeast heat rat body temperature. The role of the central nerve is the level of spinal cord, which may have some connection with the easy-to-chemical process of suppressing excitatory synapses.

0.4 ml / kg of Ginger Extract oil is given to the rats, which has a significant inhibitory effect on the egg white premium, and the effect is 5 hours, the strength is approximately aspirin 300mg / kg; 0.25 ml / kg to the rats, can significantly inhibit the cotton ball meat bud Swelling, and increases the thymus, the weight of the adrenal gland increases, suggesting that its anti-inflammatory effects may be related to the excitatory pituitary - adrenal cortex system. Gas oil 0.25 ~ 0.4 ml / kg gave a significant inhibitory effect on mice in the mouse, histamine or acetic acid in the mouse, histamine or acetic acid. The mouse abdominal injection of fresh Ginger Extract injection 5 g / kg or 10 g / kg, there is a significant analgesic effect.

The Ginger Extract extract has a significant inhibitory effect on golden Staphylococcus aureus, white Staphylococcus, Sapoccus, Tamquate, Song Dusentery, and Pseudomonas, the effect is dependent on the concentration. Especially in inhibitory effects of Flavisococcus aureus and white Staphylococcus. The Ginger Extract root extract and HBsAg were once 1 to 3 hours to reduce the P / N value of HBsAg to decrease, but the decline rate was no longer increased after more than 3 hours. Gingerbreader has a strong bactericidal effect on the injured Hanobacterium and cholerauris in vitro. There is a inhibitory effect on the fursene in the test tube. The Ginger Extract alcohol and gingerol have the effect of killing the molluster and killing schistosomiasis, which can be used to treat schistosomiasis.

Studies have shown that Ginger Extract has an antioxidant effect. Add 5% ~ 10% Ginger Extract in fat pork to boil for 1 to 4 hours, prevent pork from corruption; use this method for 4 hours of fat, its peroxide value (POV) and thiobarburic acid (TBA) It is similar to fresh fat pork; 20% or 50% Ginger Extract boiled for 4 hours of fat pork, placed at a temperature of 30 ° C for 90 days, and its POV and TBA have almost no change. The oxidation of ginger, ethanol and ether extracts on potassium hydrophane is also significantly inhibited. There is also a report that the addition of the activated oxygen removal or Ginger Extract extract, can inhibit DNA damage caused by lipid peroxidation; Ginger Extract extract can also inhibit the production of active oxygen and oxidation of linoleic acid.